Update: Unfortunately, the Geneva branch of Royaume Melazic was a casualty of the pandemic, but the Lausanne branch located at Rue Madeleine 12 remains. Please read on and find out more about this sister-act success story.

DON’T you love turning the corner on a tried-and-true path only to lock eyes on something refreshingly new and unexpected. Happened to me last week as I zigzagged through town and came upon the bright and cheery shopfront window of Royaume Melazic (the Kingdom of Melazic).

Opened only a month ago, this outlet is a sister to the flagship store that’s been a hit with cupcake lovers and baking afficionados in Lausanne since 2013. With this bright, expansive new property at 5, Place de Grenus — a beautifully renovated former dentists’ office a few steps from Manor — Melazic co-owners (and sisters) Mélanie and Soizic Romero hope to gain loyal subjects among the ‘sweet tooths’ of the Genevois. I doubt they’ll have much of a fight on their hands.

Dinosaurs are for adults, too!

No indeed, winning over fans should be a breeze, and this is from someone who has never been much of a cupcake lover…a bit too sweet and cloying for me. But this wholegrain muffin lover has been won over by one bite from a special edition chocolate-and-peanut butter cupcake that was airy as a cloud and delicately flavoured, with no oily or sugary residue.

In the interests of consumerism, I also tested one of their signature biscuits: crisp shortbread with a slightly lemony flavour and not-overly-sweet icing proved that even dinosaur-shaped biscuits adorned with green icing can be hits with adults, too.

Melazic’s cupcakes are baked fresh daily in the on-site kitchen and offered in six classic flavours along with two new novelty flavours per week.

If letting someone else do the baking is your cup of tea (as it is mine) then ordering online or stopping by the shop is the way to go.

Everything for the amateur baker

For those who prefer to make their own cupcakes, cookies and cakes, Melazic offers a wide range of baking supplies and utensils (colored icing sugar paste, edible food dyes, and edible cake decorations, etc)  that I’ve not seen offered with so much variety and abundance elsewhere.

If a lack of finesse in the kitchen holds you back, the solution lies in one of many workshops (cupcakes, cakes, working with icing sugar paste, macarons, cake pops…) Melazic offers for adults and for children in their Lausanne and Geneva locations (there are still a few places left for children’s Halloween-themed workshops in Geneva on Thursday, 25 October). Of course, Melazic’s kitchen offers the ideal setting for a little girl’s…oops, a little princess’s birthday party, too.

There’s more to this kingdom than cupcakes

According to Melazic lore, as a child Mélanie believed she had magic powers and sister Soizic would wear only purple dresses: years later they set out to create a fairy world for present-day princes and princesses filled with delectable things to eat, create, and wear.

They financed their Geneva outlet through crowdfunding: the requested Sfr50,000 was met and topped by Sfr15,000, testament to their customers’ loyalty and enthusiasm. Photo: Royaume Melazic.

With sweetness, sequins, a sprinkling of magic and lots of smarts, they’ve concocted a colorful and tasty universe where adults can indulge their childhood fantasies almost as much as their little ones can. ♥ 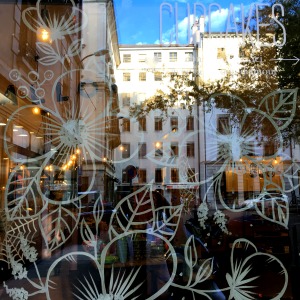