Cappuccino gets star treatment at Boréal

OF LIFE’S simple pleasures, surely a beautifully made cappuccino ranks high on the list. But it’s surprising how many coffee shops get it all wrong: bitter coffee, lifeless froth, no heart put either into or onto the precious brew.

So I was completely won over after trying a cappuccino at the boréal espresso lab (that’s a coffee bar to you and me) in the plaza facing Gare Cornavin in Geneva. In fact, I was heading over to a nearby Starbucks outlet when I thought, try something new. I haven’t looked back.

Turns out that boréal has been putting smiles on coffee lovers’ faces ever since its first outlet, an airy brick-walled space with an outdoor sidewalk terrace at the back, opened at 60 rue du Stand in 2008. Here people can sit for a quick lunch of sandwiches, salads and sweets or while away the hours sipping coffee on comfy sofas while chatting, reading magazines or surfing the internet courtesy of free wifi. 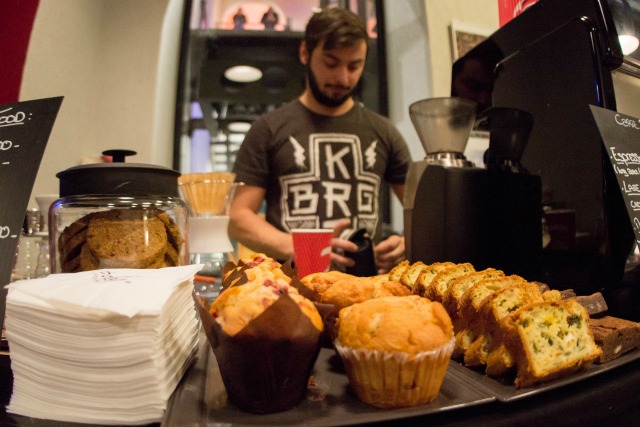 Boreal hits all the right notes

Boréal’s thirtysomething co-founders Julian Caron-Lys and Fabien Decroux have hit all the right notes, which would have you think they inherited their business know-how through family or connections, when in fact these two former IT specialists taught themselves from the (coffee) ground up (sorry, I couldn’t resist that one).

Julian tells me over a cup of coffee that their entrepreneurial journey actually began after they rejected their initial idea for a juice bar. Taking time off to regroup, Fabien returned from a year in Australia newly converted to the coffee culture he discovered there. Together they decided to recreate it in Geneva and took a year to study all facets of the business in Europe and America.

Their resulting formula for success, Julian explains, combines “Italian coffee-making techniques with Scandinavian influences,” which includes using fruitier, subtler coffee beans than the darker ones preferred in Italy. He tells me that: “the Nordic countries were the first to do something sympa with coffee culture.”

Building on their steadily growing success, in June 2012 the partners initiated the boréal coffee roaster project in order to obtain beans that are directly sourced from small producers in Latin America, thus ensuring their provenance and quality.

“Like a work of art, a bottle of wine, or high-quality chocolate, traceability is very important for coffee bean quality,” Julian says.

The beans are freshly roasted in boréal’s own atelier in Carouge, making them only the second micro-roaster in the Swiss Romandy. The “direct relationship” model they follow with producers means there are no middlemen, so the growers profit directly and fairly from the sale of their beans, helping them develop their facilities, preserve their plantations and stay in charge.

For Geneva’s coffee drinkers, this close relationship with growers means they are enjoying the best espresso-based coffee drinks in town at boréal (where coffee can also be purchased for home consumption). 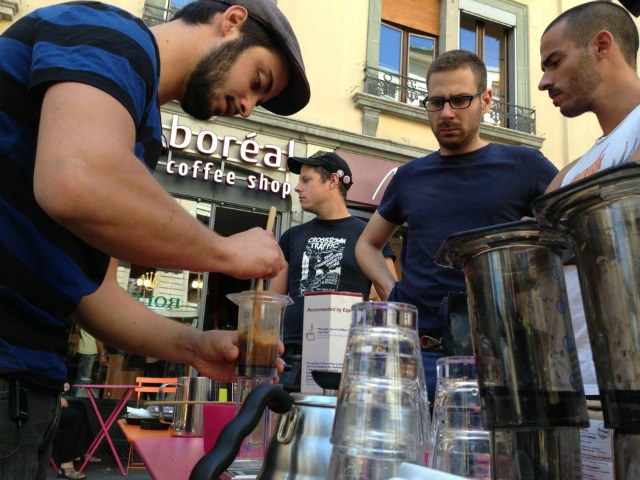 To ensure that none of the flavor is lost from coffee bean to coffee cup, the boréal team are all trained “barista”. In fact Julian tells me that the international barista community is close-knit and that whenever one passes through town they invariably end up behind boréal’s counter introducing staff to some new idea or technique.

One thing I really want to ask Julian, who manages the coffee shop side of the business while Fabien focuses on all things roaster, is how two young men, completely green to all things coffee, found the moxie to take on giant coffee shop chains and the longstanding traditional cafés so popular in Geneva.

“We’re crazy!” Julian shrugs and laughs. Well maybe just a little, but behind that is an unshakeable belief in the quality of their product and its optimal preparation as well as a clear vision of and deep commitment to what coffee culture should be about.

“Coffee is a philosophy and a way of life,” Julian explains.

“It’s about treating clients as human beings not as a wallet.” From a business point of view it’s about staying “à la pointe”, he says, sharp and on top of the game and as always, serving the best coffee in town.

For an update about Boréal’s expansion in Geneva and to Zurich, read Devotion to quality underpins Boréal’s success.

3 responses to “Cappuccino gets star treatment at Boréal”